This is the third post in a series of posts on combinatorial analysis. The post is opened with the following problem.

One way to solve this problem is to count the number of paths in a “brute force” approach by tracing all possible paths in the diagram. The total number of paths is 1,716. So counting directly is not a practical approach. It turns out that the path problem and other similar problems will become routine once the concept of binomial coefficients is clearly understood.

First we highlight the important concepts introduced in the previous post on permutations and combinations.

factorial, is defined by the product

. It is the number of ordered arrangements of

For convenience we define 0! = 1. An ordered arrangement of a set of objects is called a permutation. How many permutations are there of 7 objects? For example, how many ways can the following 7 people be arranged in a row for a group photo: Abby, Beth, Charlie, David, Edward, Frank, and George? An equivalent question: how many permutations are there of the letters A, B, C, D, E, F and G? The answer is 7! = 5040. The reasoning is based on the multiplication principle (see here). There are 7 people to choose for the first position, and there are 6 people to choose from for the second position after the first position is fixed, and so on. Thus there are 7 x 6 x 5 x 4 x 3 x 2 x 1 = 5040.

The number of permutations of

objects is defined by

Out of the 7 people mentioned above, how many ways can three people be randomly selected to receive three cash prizes of $1000, $500 and $100? An equivalent question: how many permutations are there of 3 letters chosen from the 7 letters A, B, C, D, E, F and G? The answer can also be obtained by the multiplication principle. There are 7 x 6 x 5 = 210 permutations, which is identical to

The number of different groups of size

that can be chosen from a set of

is a positive integer and

. This number is called the number of possible combinations of

at a time. The values

are often referred to as binomial coefficients because of their connection with the binomial theorem.

Out of the 7 people mentioned above, how many ways can three people be randomly selected to receive three cash prizes, each of which is $1000? An equivalent question: how many three-letter sets can be chosen from the 7 letters A, B, C, D, E, F and G? Here, the order does not matter. The answer 210 obtained previously is too large because it contains many repeats. For example, the letters A, B and C has 3! = 6 permutations. In the answer 210, each 3-letter combination occurs 6 times. So the answer is 210 / 6 = 35, which is identical to

Other notations for the binomial coefficient

. The Excel formula for permutation is =PERMUT(n,k).

Several Interpretations of the Binomial Coefficients

. Each of the following is a count that is computed by

The same theme runs through the above 6 ideas. The first one is the standard definition of binomial coefficient. The number

, according to idea 1, would be the number of all possible subsets of size

that can be chosen from a set of

objects. We can also think of choosing a subset as a random experiment of

trials where each trial has two distinct outcomes. Out of the

objects, we only want

. Then for each object, there is a decision – choose it or not choose it (two distinct outcomes). So there are

Going back to the

objects in idea 1, deciding whether to choose each object is also like labeling that object with 0 or 1 (idea 2). Since each object generates two outcomes (choose or not choose), the

characters, each of which is one of two distinct symbols (ideas 3 and 4).

The sum of two symbols, say

. We explain the idea behind the formula. The ideas 3 and 4 discussed above are particularly useful ways of looking at the binomial theorem. Consider the first several expansions.

The above derivations are deliberately detailed to make a point. For example, the result of

is product of 5 identical factors of

. Multiplying out these five factors of

is obtained by multiplying

. In the expansion, a typical term is

, which can be viewed as a

of the letters are

of the letters are

. We can also look at the situation as choosing

positions to write the letter y. There are

many ways of writing

instances of y in

would be one of the terms in the final result of the expansion. This is the reason why

is referred to as binomial coefficients.

The binomial theorem shows how to derive the power of a binomial. The formula is:

A more compact way of stating the binomial theorem is:

can be evaluated using calculator or software. We may not need the following formula for the purpose of calculation. However, it does provide a great deal of insight.

The formula can be derived by the following thought process. A

-subset of a set of

objects is a subset consisting of exactly

is the number of

-subsets of a set of

objects. For our purpose here, the

objects are the numbers

. Let fix one of the objects, say 1. There are two types of

-subsets of the first type is

-subset of the first type and the other

points must be chosen from

objects. The number of

-subsets of the second type is

-subset of the second type. So all

are chosen from the other

is the sum of these two numbers.

No discussion of the binomial coefficients is complete without mentioning the Pascal’s triangle. The triangle is usually represented as an isosceles triangle (or an equilateral triangle). We use a right angle representation. 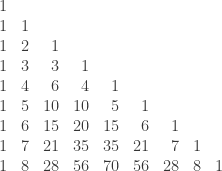 . Thus the second row gives the coefficients for the expansion of

, the third row gives the coefficients for

and so on. The most interesting part about the triangle is that it is recursive. Each row is derived from the previous row.

Each cell in a row is the sum of the two cells in the row above it – the cell directly above and the cell to the left of that. For example, the last row in the above triangle shows the coefficients for

have the following coefficients:

The Pascal’s triangle is really the recursive formula discussed above. A typical cell in the triangle is the binomial coefficient

. The cell directly above it is

. The cell to the left of that one is

How Many Subsets Are There of a Given Set?

objects, we now know that there are

many sets of 3 letters from the letters C, K, M, L, T, P and O. There are several ways to come up with the answer.

One way is to use the binomial theorem. Let

. Write out the binomial theorem. The following is the result.

When buying a hamburger at a fast food restaurant, customers can always add toppings. A basic hamburger comes with a beef patty inside a bun. A customer can choose to add toppings from this list: Cheese, Ketchup, Mustard, Lettuce, Tomato, Pickles and Onion (compare the first letters with the 7 letters indicated earlier). How many different hamburgers can be created? Basically the problem is to find out the number of different subsets of the 7 letters C, K, M, L, T, P and O. The answer is of course

. Interestingly the answer of 128 includes one choice that is the plain burger with no toppings – just the beef and the bun. So the total number of different hamburgers with at least one topping would be 127.

In general, the total number of subsets of a set with

. This is confirmed by the plugging

into the binomial theorem:

Exercise 1
Starting at Point P, a student walks 6 blocks to a diner for breakfast (represented by the red dot in the following diagram). After breakfast, the students 7 blocks to school that is located at Point Q. In how many ways can the student walk from Point P to Point Q? Assume that all the paths from any point to any point in the above diagram are available for walking.

Exercise 3
A committee of 8 people is to be chosen from a class consisting of 8 men and 9 women. If the committee must consist of at least 3 men and at least 4 women, how many different committees are possible?