Chuck-a-Luck is a game of chance that is often played at carnivals and sometimes used as a fundraiser for charity. The game is easy to understand and easy to play. The odds seem attractive. The carnival makes money consistently. It is a game of chance that seems to be popular for all sides. This post aims to shine a light on this game, from how it is played to how to evaluate its expected payout. When you gamble for a short duration, the results can be unpredictable. In playing just a few games, you may win big or stay even. What about the long run results? We will show that the house edge is about 8 cents per dollar wagered. That is, the expected payout is for the casino (or carnival) is 8 cents per $1 bet. That means for the player would on average lose 8 cents per $1 bet. We use the game of Chuck-a-Luck to open up a discussion on the law of large numbers.

The following is a Chuck-a-Luck set.

The set consists of three dice in a wire cage and a betting surface with spots for 1 through 6. Here’s how the game is played:

Note that the original stake that is returned to you (when you win) is not considered part of the winning since it is your own money to start with. This is an important point to keep in mind when calculating the expected payout.

The game of Chuck-a-Luck seems to be an attractive game. There are four distinct outcomes when three dice are rolled – zero, one, two and three occurrences of the chosen number. Yet the player wins in 3 of these outcomes. He/she loses in only one of the four outcomes. The game of Chuck-a-Luck is thus viewed favorably with at least even odds. The reasoning for even odds might goes like this: The probability of a two (if two is the chosen number) in a roll is 1/6. Since there are three dices, the probability of having at least one two is 1/6 + 1/6 + 1/6 = 3 (1/6) = 1/2, representing an even chance of winning.

To calculate the odds of winning Chuck-a-Luck, it will be helpful to find out the likelihood (or probability) of obtaining zero, one, two or three appearances of the chosen number in a roll of three dice. We can use an informal counting reasoning to do this. Again, we assume the chosen number is 2. The roll of one die has 6 outcomes. So rolling three dice has 6 x 6 x 6 = 216 possible outcomes. How many of these 216 outcomes are the losing outcomes for the player? In other words, how many of these 216 outcomes have no twos? Each roll has 5 outcomes with no two. Thus in three rolls, there are 5 x 5 x 5 = 125 outcomes with no twos. 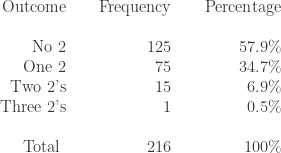 The game is far from a fair game. The player on average loses about 57.9% of the time. Furthermore, the winning outcomes (happening 42.1% of the time) skew toward the outcomes for winning one time of the original stake. So the game is lopsidedly in favor of the house (the carnival or the casino). There is another angle that we haven’t explored yet, namely the expected payout. The above table only shows the likelihood of winning and losing. It does not take into account of the expected size of the winning for the four scenarios.

Table 1 above does not take into account of the size of the winning in each of the four scenarios. Let’s look at the following table.

The short run results are unpredictable. In playing a few games, the player may win most of the games and may even win big. What is the expected result if the player keeps playing? To get an idea, let’s simulate 100,000 plays of Chuck-a-Luck. We use the function Rand() in Microsoft Excel to generate random numbers between 0 and 1. The simulated values of the dice are generated based on the following rules. 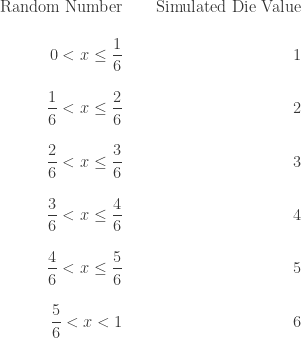 Three die values are simulated at a time. The process is repeated for 100,000 times. We cannot display all the simulated rolls of dice. The following table shows the first 20 simulated plays of Chuck-a-Luck. 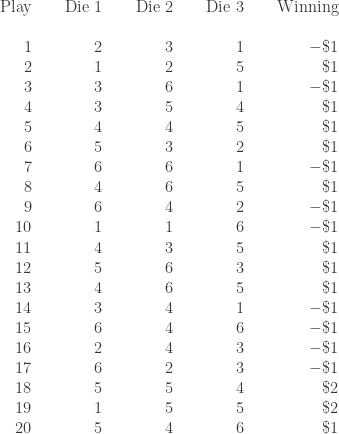 The Law of Large Numbers

The lesson is clear. The short run results are unpredictable. The first 20 games in Table 4 are actually profitable for the player. The first 100 simulated games have ups and downs but the averages are mostly above zero (Figure 1). The remainder of Figure 1 and the entire Figure 2 indicate that the long run average winning (actually losses in this case) is stable and predictable – the loss of about 8 cents per $1 bet. Any player who has sustained large losses and is trying to make up for the losses by playing more and more games should think twice.

The 100,000 simulated plays of Chuck-a-Luck demonstrated in Figure 1 and Figure 2 are just one instance of a simulation. If we perform another instance of simulations, the results will look different. But the long run results and averages will look stable and similar to the results shown above. That is, any long run results (simulated or actual playing) will have slightly different ups and downs from Figure 2 but will eventually settle at the average of -$0.079.

Thus the long run average results of playing Chuck-a-Luck are stable and predictable and will eventually settle around the loss of 0.08 (8 cents). This is the essence of the law of large numbers. In any random experiment, as more and more observations are obtained, the averages will approach the theoretical average. This applies to the game of Chuck-a-Luck or any other gambling games.

The game of Chuck-a-Luck is a good game. It can be played for entertainment or for giving to a charity. In either case, an individual player usually stops playing once the “budget” is depleted – the amount that is set aside for losing or for giving. Playing more and more games to recoup the losses after a losing streak will just lead to a deeper and deeper spiral of losses. Using the game as an “investment” vehicle is a sure recipe for financial ruin. Figure 2 should make that clear.