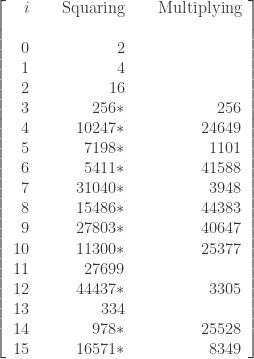 In number theory and in cryptography, it is often necessary to raise a number

here stands for exponent and is not to be confused with the natural log constant). In this post we explain an algorithm that can do such exponentiation efficiently. This algorithm goes by many names. Some of the common ones are fast powering algorithm, fast modular exponentiation, and square and multiply.

The usual notation for raising a number

. The answer to this exponentiation is in effect the remainder obtained by dividing the number

. For example the answer of

to express this result. In cryptography, the exponent

are large numbers with hundreds or even thousands of decimal digits. For example, it can be verified that

is a 129-digit number that is used as the modulus of a factoring challenge problem called RSA-129 challenge. The challenge was to factor the number

means that any message encrypted using that modulus will no longer be secure. The 129-digit

was factored in 1994. So the RSA encryption scheme using any modulus similarly in size is not secure. So the calculation as shown above is actually considered a toy problem, though a more realistic one. The fast powering algorithm (or square-and-multiply algorithm) discussed here can be used to calculate

Example 1
To illustrate how fast powering works, we start with a small example. We perform

. In the fast powering approach, we do not need to raise 3 to 23. Instead, we first find the binary expansion of the exponent 23 to transform the computation of

into a series of squarings and multiplications. To this end, we write

as a sum of powers of two as follows:

. Note that each term is the square of the preceding term, hence the word square in the name “square-and-multiply”. The following shows the squarings, all modulo 29:

Note that the squarings marked by * are the powers of 2 in the binary expansion of 23. In the above series of squarings, there are 4 multiplications and 4 divisions for the reduction modulo

. The next step is to multiply the numbers with *. After each multiplication, reduce modulo 29.

Thus the answer is

. To simplify the presentation of the calculation, we use a table such as the one below. The middle column shows the squarings. The asterisks in the squaring column indicate that the results come from the powers of 2 in the binary expansion of the exponent, meaning that these will be the numbers to be multiplied in the third column. 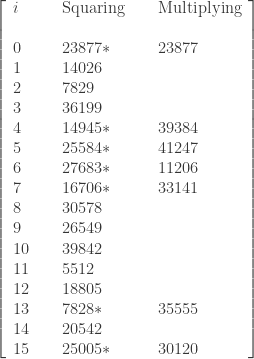 can be done by a hand-held calculator. For example, take the first squaring. The square

produces the remainder 14026. For a larger modulus

, use a calculator or software that can handle multiplication and divisions of larger numbers.

Example 3
This is a slightly larger example that is similar to Example 2. Verify the following

We perform the second exponentiation. The following is the binary expansion of the exponent 204209. 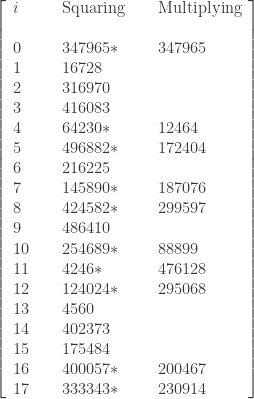 Example 4
This is the RSA-129 challenge problem mentioned earlier. We do not perform the calculation here. The discussion in the running time section below shows that this example requires at most 258 multiplications even though this example is so much larger than the other three examples. The RSA-129 challenge problem is also discussed in another blog authored by the author of this blog.

Steps in the algorithm

To summarize, there are three steps in carry out the fast exponentiation for

Note that the squarings in the second step are shown in the second column in the above tables. The multiplications are performed in the third column but only for the rows that are the powers of 2 in the binary expansion of the exponent (the rows with *).

Let’s look at the running time of the fast powering algorithm. Suppose that

is the highest power of 2 in the exponent

The above inequality means that the exponent

-bit number. The above three examples demonstrate that the squaring step requires exactly

multiplications and that the multiply step requires at most

multiplications. Overall, the algorithm requires at most

many multiplications and the same number of divisions to reduce modulo

, by taking natural log of both sides we have:

This means that the algorithm takes at most

multiplications. In particular, if

in size, then the fast powering algorithm requires at most

multiplications. For example, the exponent in Example 4 is roughly

in size. Thus the fast powering algorithm will take at most 258 multiplications for that example. Another example is when the exponent

. Then the algorithm requires at most 2048 multiplications. Thus the fast powering algorithm is fast and efficient.